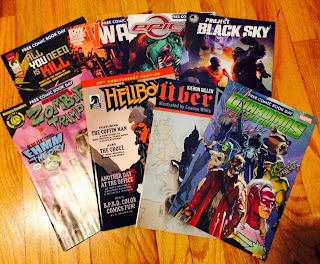 So, every year, on the first Saturday of May (May 3rd for 2014) there's a thing called "Free Comic Book Day." It's a day when comic book publishers allow certain issues to be given out "free" to whoever attends participating comic book stores. It is done in an effort to get newbies started reading comics and allows them to experience different types of comics (superhero, zombie, emo, kids, manga, etc) and encourages reading in general. This year, my family and I went to our local comic book store, Dreamworld Comics and got a chance to pick 8 comics per person (out of 62 that were available). The image you see above are the ones I picked out for myself. So far, I've only read "Guardians of the Galaxy" and I must say, it's piqued my interest. I really don't read comics; I've always wanted to, just wasn't motivated enough. Because of the upcoming film, I decided to try the comic and maybe learn a bit about these characters. It was perfect. The writers I think had the same idea in mind and this issue is sort of an introduction for those unfamiliar with the mythos. The artwork is great, the characters entertaining and I'm curious to see where this story goes. If you missed this year's Free Comic Book Day, mark down in your calendar for next year. You got nothing to lose!

Thanks to Comicbookgirl19 for the heads up on this!

Posted by Christian at 7:00 PM